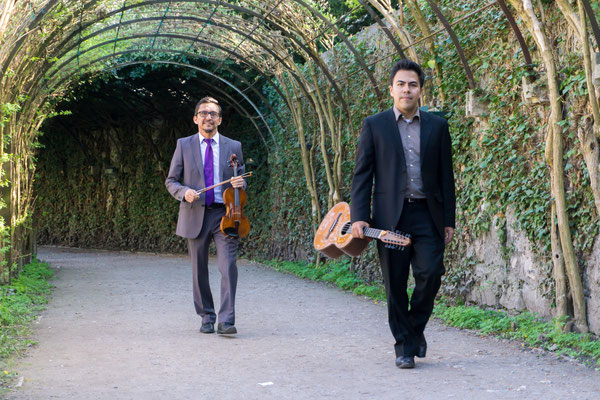 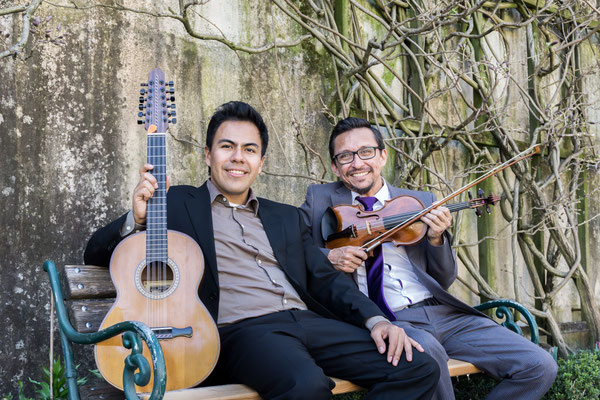 Since 2011 he lives in Austria, where he studied violin and baroque violin at the Mozarteum Salzburg.

He performs as a violinist, tiplist and on the requinto with various orchestras around the world. Recently, he has been performing on the tiple and requinto more frequently in Europe, as a soloist in recitals, with various European orchestras, or with his duo Dueto 1492.

He has been awarded by the Ministry of Culture in Bogotá for his artistic CV three times (2006, 2012 and 2015) and was also appointed "Person of the Year in Music" in Santander, Colombia.

Juan has released two solo albums on the tiple and requinto.

The duo is the result of two Colombian artists meeting in their home town of choice, the city of Salzburg - Austria, with a big enthusiasm and the intention of spreading the Colombian music in Europe.

In 2018 they started to develop this project which mixes the different elements of the academic language and chamber music — in which they have been professionally trained during many years of study as violinists — along with the traditional and folkloric sounds they grew up with and had an important participation at  national level.
Juan Manuel Araque-Rueda, violinist and tiplist, "National Champion of Tiple and Requinto" and owner of other outstanding achievements, together with Nelson Diaz, violinist with many years of international concert experience, achieve an aesthetic and technical balance, making Colombian music more universal and understandable to the general public, conserving its joyful and latin character to the delight of all.
They perform instrumental music from Colombia's different regions on the tiple and violin, with rhythms such as Bambuco, Danza, Guabina, Joropo, Torbellino, Pasillo, Currulao ... among others and of course a varied and cheerful repertoire of outstanding composers of the 20th century.

Anyone who listens to Juan Manuel Araque will find in his performances a careful phrasing, a solid sonority at the service of the expression that is required and — as an extension of the speech — an extensive use of dynamic and timbral contrasts that are handled wisely and with very good taste. That apparent simplicity of the accompaniment reveals the deep knowledge of some rules of the game that are not written in any manual but that refer us to a term: relevance

I remember — and it still amazes me— that with only 12 years old and having won the most important junior competitions in Santander, his beloved Requinto already sounded with personality and a marvelous soundness, uncommon in a child his age. His talent and discipline announced a future full of achievements.

How many things have happened in his life since that moment, and today, having the privilege of writing some notes for this fantastic CD, I think the Juan Manuel that I knew then was not only promise: the love, the total support and complicity of his family, have strengthened his discipline and the clarity of his life’s project in the art.

Today Juan Manuel has become probably in the most important tiple-requinto player of his generation: his playing personality and his virtuosity that seems to have no limits, he unfolds them with true spontaneity and forcefulness, always impregnated with warmth and a moving sensibility.

After making a careful hearing of this work, I can only recommend with real enthusiasm and conviction this interpretative proposal that, without a doubt, will become an expressive and technical referent of the execution of the tiple-requinto in Colombia.

Emotion, national pride, optimism, I do feel noting that our beautiful colombian andean music continues its pilgrimage in the hands of a very young, talented and restless artist.

Juan Manuel Araque Rueda is today paradigm of excellence, based on his love to ours, conscientious work and constant support from his parents.

He combines his musical virtuosity with entrepreneurial skills, promoting the meeting of new performers of our music, thus securing its permanence.

In Juan Manuel´s capacities and Tiple, Colombia has a beautiful hope. 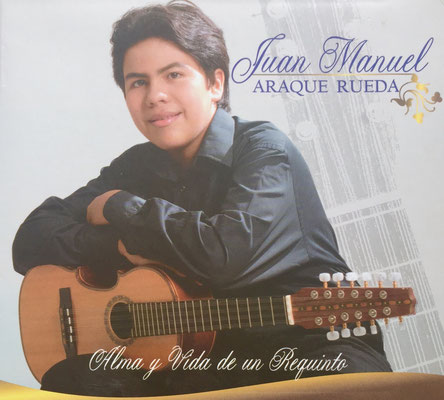 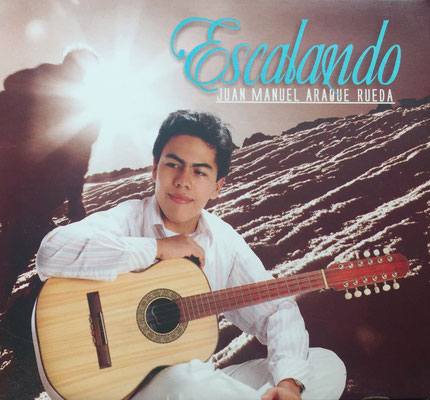